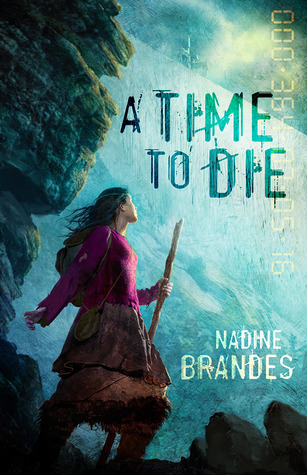 Hello, folks! I hope you’re enjoying warm spring weather! Today, I am reviewing A Time To Die by Nadine Brandes.

Three hundred sixty-four days, seven hours, and sixteen—no, fifteen—seconds left to live. Like everyone else on the east side of the Wall, Parvin Blackwater has a clock counting down the days until her death. At only seventeen, she has only one year left.

When the authorities find out she has been illegally sharing a clock with her twin brother, she is cast through the Wall—her people’s death sentence. What she finds on the other side about the world, about God, and about herself changes Parvin forever and might just save her people. If she can get the word to them before her time runs out.

Okay, let’s start out by saying that the worldbuilding in this book is AWESOME. There was so much thought put into what it would be like if you knew when you were going to die, and how the world around you would be different. It was really interesting to read and think about. I was so curious about the world!

The character of Parvin (also, I love her name. We need more Parvins out there) was definitely in a tough situation. Her relationship with her brother was really nice to read about. My only issue with Parvin is that I struggled to really know who she was. At first, she was a holed-up-in-her-room sewest who just wanted to live life and not worry about school and such. Then that changed to someone who was going off on adventures and trying to save people. But this also kind of worked. She found purpose in life before her clock ran out. (And also we didn’t see her sew enough. I was ready for a character who enjoyed sewing)

Parvin’s relationship with her mother was something I really liked. It was original, far from the perfect mother-daughter relationships that I’ve seen a lot of. I also really liked Willow, she was adorable! Skelley Chase had some cool advice at first, and I’m not happy about his twist because he was such a great writer-mentor.

Jude and Hawk were really cool characters too. I enjoyed reading about Jude until the romance set in. After that, I just stopped liking him. I loved their relationship when they were friends. Not so much when the romance set in. So tally ho, Jude-man. You shall be missed, but your contributions to the plot were very interesting.

I NEED TO KNOW MORE ABOUT REID. Seriously. I hope his secrets play into the next books, but I really want to know more about this apparently secretive Reid.

At first, the plot was pretty slow. Time passed quickly and I kept waiting for something to happen. When it finally did, it was really suspenseful at first. I love a good survival story. But then when they arrived at Ivanhoe, everything just seemed to keep going on and on.

Overall, there were parts of this story that I wasn’t a fan of, but the parts that I did like were amazing. The world felt like a nice break from typical YA dystopian books, and I can’t wait to find out what happens next!